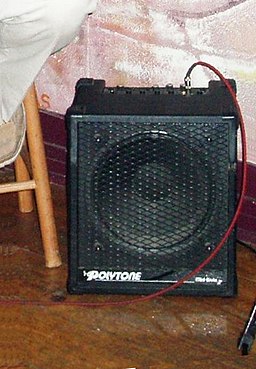 I reviewed some jazz guitar amps in a previous post. Most but not all of those jazz amps were solid state. This post will look at some of the same companies that have new models and some amps that I hadn’t included in the previous post. All are solid state amplifiers. They seem to share the same philosophy of making a solid state amp react like a clean sounding tube amp through the use of modern high powered designs. These are not modeling amps. They are also similar in that they are smaller and lighter while producing a big tone.

I previously reported on the Quilter Micropro 200 amplifiers. The were two channel amplifiers with 100 watts on each channel. The 8-inch speaker model was recommended for acoustic as well as electric guitars. You could even use one channel for a microphone for vocals. A number of YouTubers reviewed the use of the amp for jazz guitar.

Quilter has taken their previous models and given them upgrades. I had tried the Micropro 200 with 8-inch speaker but haven’t tried the new models. However the videos show they’ve improved the control layout so it is more logical. One of the problems some people have complained about is that the controls are too complicated. The Micropro tries to be an all purpose tool that can be used for pop, rock, blues and even jazz. But all those knobs just confuse some people. The new Mach II models are better but still have a lot of knobs.

A problem with the Quilter marketing demographic is the target customer seems to be rock and blues guitarists. Jazz guitarists who discover the amp often like them a lot but it is difficult to find as many demos and reviews by jazz players.

The following is a video of the older 200 series used as a jazz guitar amp.

I didn’t say anything about the Quilter Aviator series in my previous post. The series has been updated but I can’t tell how they’ve been improved. These amplifiers are supposed to be similar to old open back models such as Fender made (and still makes). The big difference between them and the Mircropro amps, besides the open back, is they are simpler designs with fewer controls. The resulting amp is simple, does one thing well and also is less expensive. If you don’t need all those controls and sounds, don’t need to plug in acoustic guitars or mics, then this might be what you need. Some models have 2 speakers which will increase the size and weight.

Again, the falling video is of one of the older models being used for jazz. The new models have “Gold” appended to the Aviator name.

Henriksen had four variations of the amplifier they had designed for jazz guitar. You could get either a ten or a twelve inch speaker with an optional tweeter that could be switched off if you didn’t need it. It proved to be a popular amp with jazz guitarists. The tweeter version was designated as “ER” for extended range and made for a better sounding acoustic guitar sound.

Bud Henriksen, the founder, passed away. His son now runs the company and designed a new small amp based on some designs his father had been working on.

The Bud amp is what came out of the above, named for the founder. The amp is 9x9x9 inches and weighs 17 pounds. It is a two channel 135 watt amp with a 5-band equalizer instead of the more common low, mid and high filters. It also has reverb.

This little amp has been getting a lot of praise from guitarists. It’s limitation is it is designed for a clean sound. But if that’s what you want, you can sculpt the sound to fit any acoustic or electric instrument. You can also use one of the channels for a mic. The price is similar to the Quilter Micropro series (currently about $1000). This is great little jazz guitar amp. I want one.

The following shows to jazz guitars going through the same Bud amp. Check out the website for videos other guitars being played through the amp.

OK, one more. Nylon strings through the Bud.

The 110, 110-ER, 112 and 112-ER models mentioned above have been replaced with the 310 and the 312. The tweeter is no longer optional but can still be switched off. The other difference under the skin is that the improved circuitry that went into the Bud amp is now the heart of the 310 and 312 amps.

So far I haven’t been able to find many jazz guitar demos of the 310 or 312 models. Here’s one I found from NAMM.

DV Mark is known best as a maker of bass amps. Bass amps share a lot in common with a good jazz guitar amp so it’s not surprising that this Italian company also makes jazz guitar amps. A number of online music sites are now carrying these in the USA.

The Little Jazz is only slightly larger than the Henriksen Bud — it is about a 10.5 inch cube. It has 40 watts of power and reverb with an 8-inch speaker. It’s controls are more typical than the Henriksen amps with only low, mid and high knobs for adjusting the frequencies. On the other hand, the price is hundreds of dollars less than the Bud. Beware that some users complain of noise from an internal fan. This doesn’t seem to be noticeable when playing loud or at a gig but is distracting for some when sitting in your bedroom.

The Jazz 12 electronics are identical to the Little Jazz. The only difference is the size of the cabinet and the speaker (12″ obviously) and the price.